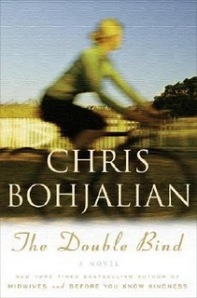 When I googled Chris Bohjalian, I discovered that he’s quite a successful writer and that one of his other novels, Midwives, was an Oprah’s Book Club selection.  I also found out that most people think The Double Bind is his worst novel!  I have a couple of suggestions that might make your reading more pleasurable, but first a quick summary on what the book is actually about:
Laurel is a young social worker who’s employed by the local homeless shelter in Burlington, Vermont.  At the start of the novel, we relive Laurel’s memories of being attacked by two men on a rural road during a solo bike ride.  As Laurel heals emotionally from the violent incident, she comes across a set of photos from a recently deceased client of the shelter which might connect the old man to her past in some very mysterious ways.

Tips to make your reading more enjoyable and other reasons to give the novel a shot:

On the downside, the writing isn’t superb.  I HATE/LOATHE/DETEST impersonal descriptors – such as referring to Laurel as ‘the social worker’ five thousand times.  Surely, Bohjalian can do better than that.  I also found fault with Bohjalian’s portrayal of Laurel.  I’m just not sure a man is capable of honestly writing from a woman’s perspective, especially a woman who is tormented by a brutal, physical and emotional attack perpetrated by males.  That being said, the setting is beautiful, the story is intriguing, and there are PICTURES!