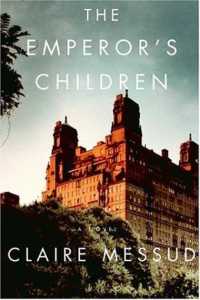 I opened the first page of The Emperor’s Children somewhat apprehensively.  A few fellow readers had warned me about how atrocious the novel was – how they weren’t able to finish.  Being the special person that I am, I viewed this knowledge as a literary challenge – some might call it stupid – you decide!

Claire Messud ‘s novel is often regarded as one of the first, post-9/11 stories to actually deal with that fateful day.  The reader is drawn into the world of three privileged thirty-year-olds as they struggle to find success – or rather, truth – in a world that has seemingly left their Brown-educated superiority behind.

If you aren’t into novels about characters (often lacking any kind of action or plot), then I’d say you should probably avoid this work.  Personally, I liked these people – they were ugly, but real.  I’ve known these people.

NYC is also a character – a beautiful, false, fickle friend.

And then, there is Bootie.  Perhaps the most honest character and by far the most interesting.  We watch as Bootie comes to live with his uncle, his hero, his father-figure only to be crushed with the disappointment of his hero falling from grace.  And then, in his misery, Bootie is disowned by his uncle and makes a fateful decision the morning of September 11, 2001 that will change his life and everyone around him forever.

At first, I hated the ending – could not believe that Messud would write the attacks the way she did.  The ugliness of how her characters handle the situation – Bootie’s terribly selfish decision – using the attacks as a way to garner a personal gain of sorts – he makes a total mockery of people who truly lost their loved ones that day.  I loathed Messud – but then, something changed.  With the 10 year anniversary quickly approaching, I realized how much we’ve idolized what happened that day.  We had to – to survive, to move-on, to honor the memory of those we lost.  But the truth – the truth is an altogether different thing – an often much more sordid picture.  So Messud didn’t tell the story we expected, the one we’ve been told over and over – instead, she told us a truth.

Lastly, a bit of warning – you should just go ahead and have a dictionary on hand.  Messud likes to use SAT vocabulary words.