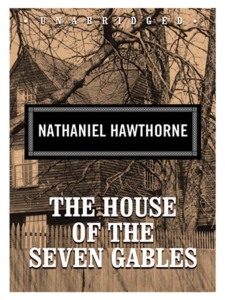 I’m so behind on book blogging.  Too many episodes of Friends, The Big Bang Theory, and perhaps a couple of times through Harry Potter and the Deathly Hallows Part 1!  Alas, the books on my table that have been read and tossed aside with nary a review are beginning to add up.  So I’m going to wing it!

Seven Gables was written in 1851 – a classic! – by Mr. Hawthorne who also penned The Scarlet Letter (another fave!).  I’ve always loved Hawthorne and his Romances!  No, this book isn’t a love story – it’s a Romance (the capital R makes all the difference).  Romances are generally stories that transcend Realism – generally through fantastic or supernatural elements like ghosts, spirits, and other such fun frights.

The story is really quite simple – an old family builds a huge house in Salem, Mass. and commit some dastardly deeds that come back to haunt their family several generations into the future.  That pesky past is always trying to ruin the future, isn’t it?

Hawthorne’s prose is beautiful and complex, but the story filled with murder, secrets, hiding places, and other intrigue tend to make the reading a bit easier.  Plus, you can actually visit The House of the Seven Gables in Salem.  I did!!  The story is only fiction (don’t get too excited), but Hawthorne’s cousin really did live in the house once upon a time.  Hawthorne himself was born just down the street from Seven Gables, but they’ve since relocated his childhood home to live right next door to Seven Gables – you can visit that too!!  I love when literature comes alive.  We took some pictures, check them out:

That’s the House of the Seven Gables – a really fun house to tour because they have crazy hidden staircases that you are actually able to climb – and I do mean climb.

That’s Hawthorne’s birthplace.  A much more basic sort of house, but filled with literary genius.  I was hoping that something would rub off on me and I’d leave to write the world’s greatest literary marvel – not so much.

Go visit Salem!  In addition to the literary splendors above, they have witch museums and really cool old graveyards. The coast is beautiful and Boston is just a hop, skip, and jump away.