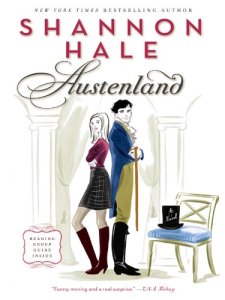 You might have noticed the slight change in post title – I’ve decided to rename my ‘reviews’ to ‘views’.  A sort of blogging nickname, if you will.  Why?  One of my main goals of 2012 is to stop taking things so seriously (including myself) and just try to have more fun.  So why not start here?  So long uptight Reviews and hello whimsical Views!  Feel free to mock me in the comments.  Basically, just hoping to keep things conversational in the 2012 because reading is meant to be fun – at least outside of school!

Ok…enough already and on with the view!  Austenland is one of those Pride and Prejudice spin-offs (or professional fanfiction) that I so dutifully avoid.  You see, I’m an Austen purist.  Elizabeth Bennet is so close to my idea of a perfect character that I cringe when anyone tries to rework her.  FOR SHAME!  Earlier this year I gave Pride and Prejudice and Zombies a little read (I mean, who doesn’t like zombies right?) and came away seething in anger.  So what convinced me to give Ms. Hale a shot?  Very simple:  Kindle Daily Deal for which I’m a complete sucker.  Also, I’ve dedicated December to reading whatever floats my boats since I’m way past my reading goals for the year.

Austenland follows Jane (shocker!), a thirty-something New Yorker, on a trip to England bequeathed to her by a dearly departed insanely rich Aunt.  She’s been booked as a guest at an English resort of sorts that caters to women obsessed with all things Austen – think of it as a huge role playing game for the Darcy obsessed upper class.  And for a woman who has sworn off men because no one could ever possibly live up to the incredibly sexy Fitzwilliam Darcy (as portrayed by Colin Firth in the 1993 BBC miniseries), Jane is the perfect nut…er…vacationer.

Essentially, Hale has written chick lit for Austen fans.  As with all chick lit, the entertainment lies in the journey, not the ending (since they all tend to end the same way).  And Austenland’s journey begins on rocky footing.  I had a hard time relating to Jane on any plane existent on planet Earth.  Who is ashamed to love Pride and Prejudice – so much so that they hide their dvds in a potted plant?  Also, who can’t have a normal relationship because of a fictional turn-of- the-19th-century man?  Crazy people who should be committed come to mind.  So Jane and I did not get off to a good start, but rather surprisingly, we finally hit it off once she reaches Pembroke Park and recognizes the cray-cray that lives inside, coming to her senses and learning to enjoy her life as it exists in actuality.

I do applaud Ms. Hale for remembering that fans of Austen are often intelligent women who can enjoy the entertainment value of good chick lit without wholly abandoning their literary tastes.  She writes a really brilliant moment in Austenland where Jane discovers her behaviors often mimic those of Darcy more than Elizabeth Bennet’s.  A great gender switch and blending of gender identity – highly ironic in a genre so tooled towards women.  If only there had been more of these brilliant little revelations.

All in all, there’s nothing award winning or knock your socks off about Austenland.  Jane suffers as a relatable protagonist and often comes off as a caricature of Austen fans. But if you love the BBC’s P&P, you’ll probably find something to enjoy here – if not, go ahead and skip it.  The story is filled with cliches down to the quintessential airport chase scene at the end.  You’d be much better off finding a few hours to settle down with the P&P dvds, as long as you promise not to hide them in any household greenery!

I would like to add that many people seem to enjoy Hale’s middle grade and young adult fiction.  So perhaps those of you interested in her writing should begin there!

Up next:  I’ve just begun Wives and Daughters by Elizabeth Gaskell.  A huge chunkster novel that I have no hope of finishing before the new year.  However, I’ve also just begun my first audiobook from audible.com – Delirium by Lauren Oliver that I’m quite enjoying thus far.  For the January book club discussion, I finished reading The Night Circus by Erin Morgenstern last night and can’t wait to discuss it with everyone (a little hint…I adored it!).