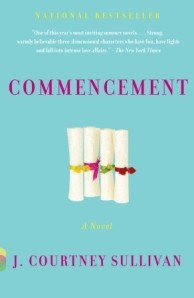 Commencement was J. Courtney Sullivan’s debut novel – she has since gone on to write Maine, a book released last year to critical acclaim.  The good news seems to be she’s matured as a writer (although that’s hearsay as I haven’t read her sophomore work), the bad news being that I chose to read Commencement first.

We join Celia, Bree, Sally, and April as they begin their first year at Smith College (an all-girls liberal arts establishment – also Sullivan’s own alma mater) and then finish with the girls in their fourth/fifth year removed from school.  The girls struggle with identity and the balance of feminism.  And that’s pretty much the sum of things.

My problem with Commencement is not its writing.  Sullivan manages to write affectively and intelligently enough to put this novel just a step up from general ‘chick lit’.  Unfortunately, there’s nothing new or fresh here – in fact, I’ve read this novel two times before:  Curtis Sittenfeld’s Prep and Beth Gutcheon’s The New Girls.  And once was more than enough unless you just really get your kicks on reading about the far-fetched collegiate bonds of women – or really,girls.

Also, does Smith actually resemble the school described in these pages?  Are all the women there either lesbians or ‘temporary’ lesbians? This seems to be a bit offensive to homosexual and heterosexual women alike.  Do townsfolk line up along the street to watch young women strut around campus in their underwear or sans clothes entirely?  I’ve been to college myself – lived in all-girl dorms – and nothing about this experience rang true for me.  Yes, I had lesbian friends – yes, I knew girls who ‘experimented’ in college, but steadfastly claimed their heterosexual allegiances – and yes, I lived with girls who liked the attention garnered by wearing next to nothing – but none of these aspects defined us as a group.  Am I completely off base here?

Moments of their college life were endearing and heartfelt – the loss of a mother, a broken engagement, a sexual assault, but once they graduated I couldn’t be bothered anymore.  The story leapt the bounds of plausibility and credulity is important when painting the lives within a character based story.  How are we to relate to these women, see ourselves in them, when they aren’t recognizable to the common reader?

And finally, Bree is meant to be from the south (Savannah, in particular) and part of the novel takes place in Atlanta (where I live).  Please do not judge our people by Sullivan’s portrayal.  Sullivan gets it wrong…just so wrong.  Sigh…

So not recommended and a huge downer after The Tiger’s Wife.  Has anyone read Maine?  I’ve heard it’s fantastic, but I’m wary after Commencement.