Friday night, a few of us from the Litwits drove to Woodstock to an author event honoring Erin Morgenstern and her debut novel, The Night Circus.  The event was hosted by FoxTale Book Shoppe – a great new-to-me Indie that has been around for quite some time (I only wish it wasn’t 40 miles away).  At around 4 pm, I donned my black, white, and red attire, grabbed an audio book, and braced myself for the rush hour journey up I-75.

The drive lasted about an hour and a half – what with traffic and an extra thirty minutes trying to locate the small shop in downtown Woodstock, but I arrived eventually and settled in to wait for the beginning of the event.  The price of admission was $30 – basically, the price of the book which we received upon arrival and was the only copy we were allowed to have signed.  No big deal – supporting local small businesses is important (especially book stores!). 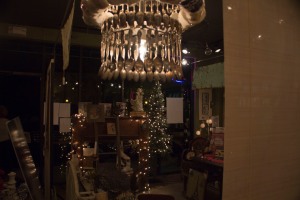 People quickly started arriving and I was pleased that everyone else was wearing the appropriate uniform – so many red scarves and fancy flourishes!  I made my way into the shop that was filling quickly, grabbed a great spot against a bookshelf right in front of the microphone, and used the short shelf as a tripod of sorts for my husband’s amazing camera that I had no idea how to use – see pictorial evidence throughout post.

Next, I experienced what I’m calling – Adults Behaving Badly.  Pushing and shoving, saving spots for attendees not actually attending, and not one, not two, but three cell phones ringing during Erin’s reading.  Unacceptable and I’m super glad that Erin called them out.  This aside, Erin was a very engaging and humorous speaker (also forgiving).  I was pleased that so many people seemed to love the novel and have tons of great questions for her.  The diversity of the audience was also welcoming – at least in regards to age and gender.

What did we learn?  Lots!  First, Erin contacted the store after seeing their window display dedicated to her novel on Twitter (the power of Twitter!) and volunteered to travel south for the event.  She discussed how The Night Circus came to be as an exploratory experiment she began during National Novel Writing Month (NaNoWriMo) back in 2005, the many revisions the novel went through (such as not having a plot through the first several revisions), and the ultimate publishing in 2011 and overwhelming immediate success.  She explained that the option to the rights of the movie had been sold (not the actual rights, yet) to Summit Entertainment which she’s quite pleased with and that David Heyman is still in talks to produce.  If the movie gets made, it won’t be completed for at least another 2 years.

Her next novel that she’s begun, but hasn’t had enough time to really develop so far is a sort of 1930s/1940s Alice in Wonderland inspired story that sounds AMAZING.  She’s obsessed with perfumes and can’t wait to see her costumes come to life.  The only actor or actress she’s ever really pictured in any role with The Night Circus is a Geoffrey Rush type for Hector (I think it was Hector, either him or Alexander H.).

Next we lined up around the store for the signing.  The line moved efficiently which was awesome because it was a little nippy and we had found ourselves near the back of the queue.  Once we made our way to Erin, she graciously signed our books, thanked us for waiting so long, and took a picture with the three of us (see below!).  All in all, the experience was great and I can’t believe I’ve never attended an author event before.

Oh…and for those of you who didn’t know (myself included), she’s quite the artist and has designed her own full set of tarot cards.  They haven’t been printed yet, but I bet they’ll be amazing.

9 thoughts on “An Evening With Erin Morgenstern”