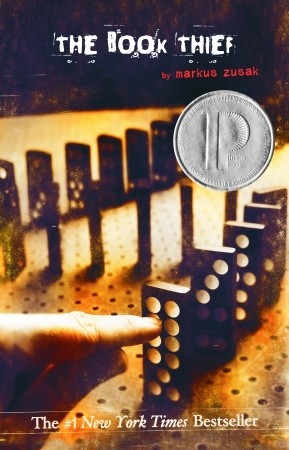 Pretty much the entire blogosphere has already read this book as I’m extremely late to this party.  And most of the reviews are overwhelmingly positive – like 5 star, best-book-in-the-world positive.  So instead of focusing on the best aspects of the book, I’m choosing to go the opposite route and discussing the not-so-great bits that turned me off a great deal.

I want to preface this review with some clarifications.  On Goodreads, I rated this a 3 star read which is fairly accurate.  I liked it well enough to keep reading.  An admission that probably stains this review, perhaps unfairly:  I am not a fan of Holocaust fiction.  I just believe that the true stories, the non-fiction has so much more to offer.  A real-life experience about a  person who lived and breathed is always so much more affecting.  And, to be honest, there are so many true stories still left un-told that the fiction just seems misplaced and lazy.

Problem #1:  Death as the narrator.  I was really looking forward to this perspective and the experimentation with the narrative.  I expected a freshness to the story, but instead got a major distraction/intrusion.  I found myself really engrossed in the novel when I forgot Death was narrating, when the POV just seemed an anonymous third person.  When Death would announce himself again and again, I was completely thrown out of the story.  I also found his sarcasm jarring.  While understanding the need for comic relief in such a bleak novel, sarcasm shouldn’t be that humor’s vehicle.  Just bugged me personally.

Problem #2:  The random bits of text that are boldfaced and centered to help bring our attention (or beat us over the head) with one of the author’s genius bits.  Annoyed me to no end and yet again, took me out of the story every time I had to pause for one of these moments.  Just nothing smooth about the transition between flowing prose and gimmicky pop-up text.  Case-in-point – the last line is done in this manner.  It was a beautiful thought, but ruined by the beating it gave me in all its bold glory.  Zusak is telling, not showing.

Problem #3:  I’ve read many reviews that cite Zusak’s poetic, gorgeous prose.  So obviously I’m in an extreme minority here.  I do think Zusak is trying to be poetic and that sometimes it works – that he actually creates something profound and moving.  Other times (most other times) I find that he’s trying way too hard to sound poetic and comes off as rambling.  Half the time his phrasing doesn’t even make sense.  It reminds my of my own adolescent poetry where I would try so hard to sound genius.  Sometimes I amazed myself at what I wrote, but most of the time I ended up giggling at my cheesy, heavy-handed efforts.

Problem #4:  The manipulative ending.  Read reviews long enough and you’ll learn how the ending had everyone sobbing and vowing that this book had changed their life.  I call this huge emotional outburst and tragic ending manipulative.  It’s there not to teach us something, but to make us think we’ve read something super amazing because it made us cry.  I get angry at endings like this.  They feel so HOLLYWOOD.  I would have preferred far more subtlety which would have made much more sense with the story anyhow.  For the record:  No, I did not cry.  I was too annoyed to cry.

Those problems aside, I will say this:  I would highly recommend this to actual young adults.  Books like this hold a lot of value and merit for teenage readers because they act as stepping stones to greater literature and the desire to learn more about our world.  Obviously, this book destroys Twilight and the like as being a worthwhile read.  I also think all of my problems above will be things that teenagers really enjoy – the gimmicks and whatnot.  Shakes their reading experience up a bit and doesn’t bog them down in boring prose, but still offers up a serious story.

As for everyone else, also worth a read if for no other reason than to form your own opinion.  The story is sweet, moving, subtle and has a lot to offer its audiences of all ages.  Many characters you’ll find endearing and lovable.  I’m just not as enthralled as others and wanted to be a voice for those who also didn’t feel like this novel had changed their lives.  So definitely give it to the teenagers in your life and when you have a little down time, pick it up for yourself.

11 thoughts on “The Book Thief by Markus Zusak”