I feel like I’ve ignored the book/blogging world for several days too long now, but I had a busy weekend enjoying football and the holiday.  Here’s what I got up to (which will mainly involve food):

Friday night, Jimmy didn’t get home until 9:30 so our eating options were a bit limited.  We opted for a stand-by fav, Noche, which feels more like a bar than a restaurant when the sun goes down!  But the food is enjoyable and I’m a complete sucker for tapas.  Anywho, I had the exact dish below (the paella – all pictures courtesy of restaurant website):

I really like their paella for the slow burn effect.  I can’t eat spicy food that overwhelms me immediately, but this dish lets me get pretty far along before it catches up.  The mussels at Noche are always amazing.  And the sausage in this dish has excellent flavor.  We also had a bowl of mussels, fried calamari, and Jimmy had something else I don’t recall.

Saturday, we lounged around and watched the UGA v. Buffalo game.  UGA won!  When we finally got around to starving, we crawled out of the house and over to another Town Brookhaven establishment – Bua Thai+Sushi.  Neither one of us had ever eaten here, but it’s in the neighborhood and I was craving a really good patio for some fresh air.

We had fried calamari to start (yes, again – we’re a bit obsessed).  We both opted for the Thai menu for dinner – Jimmy got some curry and chicken and I got the seafood noodles.  My seafood noodles were basically seafood pad thai.  Thrown into the basic pad thai mix were some lovely grilled shrimp, calamari (again! but not fried), and scallops.  I’m in a bit of a seafood kick, apparently.  We both agreed the food was pretty good, not amazing, but a bit too expensive to eat there regularly.

Sunday night, Jimmy had a hankering for hot dogs!  So we headed down to Poncey-Highland to try out Richard Blais’s ‘haute dog’ joint, HD1. 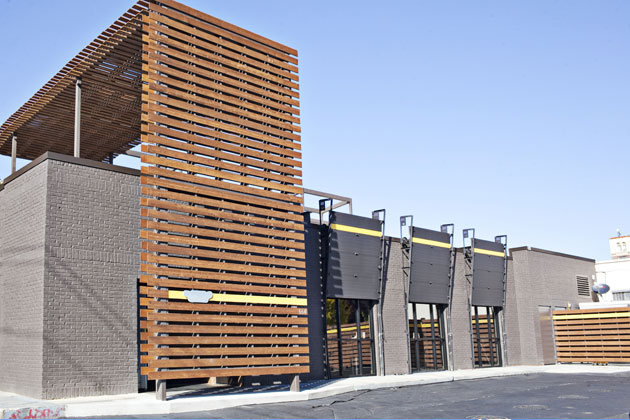 We were pleasantly surprised by how good the food was.  A bit expensive for some hot dogs, but that’s to be expected at trendy places.  Anyway, we started with the boiled peanuts which were absolutely to die for.  They are flavored in ‘North African spices’ per the menu and were just amazing.  I’d go back for those babies alone.  As for the dogs, I ordered ‘The Whiz’ which is a hot dog on artisan bun plus cheese and fries – yes, fries on the hot dog.  The bun was yummy, the hot dog cooked perfectly, the fries delicious, and the cheese was a bit overwhelming.

Jimmy ordered the ‘Merguez’ – a house stuffed lamb sausage, currants, minted cucumber, and Labne yogurt.  Not my cup of tea, but he enjoyed it!  He also got an order of chili cheese fries and I stuck with the regular fries, both of the waffle variety.  Fries were ok, but a bit over salted in my opinion.

Monday involved lots of sleep and grilling out steaks and corn.  Tonight we’re headed over to The Wing Factory in Chamblee for some awesome wings and trivia!

This post might have bored any non-Atlantans to death, but Jimmy and I have decided to track our restaurant experiences so that we have a record of what we liked and what we didn’t like.  So be prepared for more food posts!  And if you’re ever in the area, you’ll have a handy food guide of sorts.

Hope everyone else had a fabulous weekend!