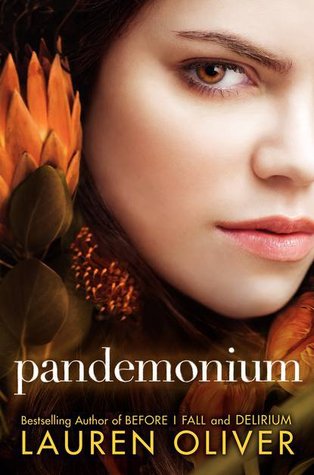 Pandemonium is the second book in Lauren Oliver’s Delirium series and not one I was anxiously awaiting. My feelings for Delirium can only be described as lukewarm and it has been over a year since I finished that one. But with the third and final book, Requiem, due to hit shelves in March, I decided to dust off my copy of Pandemonium with hopeful, yet tempered, expectations.

I definitely won’t completely spoil (there are light spoilers sprinkled throughout) the first book for y’all Delirium virgins out there, but the general plot line of this series involves a world where love is seen as a disease and children undergo the ‘cure’ (essentially, a form of lobotomy) by the time they reach 18. Lena lives contentedly in this world until she falls for Alex and he opens her eyes to the truth of the world she has come to know and trust. You can read my full review of Delirium here.

Pandemonium opens in the first few moments following the cliffhanger ending of Delirium. Oliver’s narration has changed a bit, however, in that we now switch back and forth in time from then (immediately following Delirium) to now (a few months into the future). While many non-linear plots can feel more harrassing than pleasantly plot progressing, I must give Oliver props because I thought Pandemonium handled this back and forth quite well. It added a little something extra to the pacing that I felt was lacking in Delirium. I never once felt bored as the scenery was constantly changing and I was learning new things from page to page. Lena, herself, also felt like a much more developed and relevant protagonist.

I was pleased that Lena spends a large majority of this book without a boy by her side. Yes, Oliver does eventually introduce a love triangle of sorts, but the romantic relationship aspect doesn’t overwhelm the plot like so many YA novels, including Pandemonium’s predecessor. As for the love triangle, this one didn’t bother me. Nothing about Lena’s situation with Alex and Julian rings untrue. It’s only natural for Lena to move on thinking that Alex is dead, especially at such a young age and having been with Alex for so brief a time. I appreciated her ability to deal with her grief and move on struggling with her guilt all the while. That being said, Julian wasn’t my favorite character and of everyone present in Pandemonium. I definitely think he was the least well-rounded. He does have excellent potential, however, and I hope that Requiem does a better job garnering an emotional attachment to him.

For once, I actually thought the sequel outshone the first book and I’m eagerly anticipating the third book’s release! I’m glad I kept reading and think that Oliver fixed all the nitpicky problems that bothered me so much in Delirium. What most intrigues me about the next installment is yet another narrative switch – instead of alternating time lines we’re getting to see the trilogy wrap up through the perspectives of both Lena and her best friend Hanna. Can’t wait to see how things play out!

6 thoughts on “Pandemonium by Lauren Oliver”