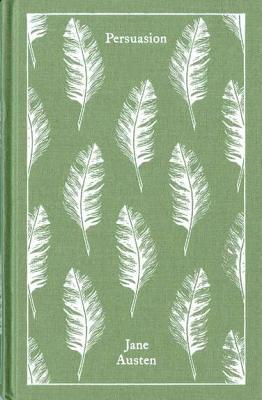 I only read Persuasion for the first time a couple of years ago and it has always been an Austen novel not very familiar to me. So many readers adore her final work, so I’m not sure why I haven’t caught on quicker. January felt like a good time to rectify that situation so I picked up a new edition – the Penguin clothbound – and dove in. And now I’m a huge Anne Elliot fan and adoringly Team Wentworth!

Persuasion follows Anne Elliot, Austen’s oldest heroine (correct me if I’m wrong) who many years ago was persuaded to call off her relationship with Wentworth due to his inferior place in society. He had no family connections and was a simple navy man. Heartbroken by Anne, he goes off to pursue his naval career, becomes extremely successful, and finds himself back in Anne’s neighborhood and with loads of money and prominence. Meanwhile, Anne’s silly father and older sister have allowed their estate to fall to near ruins. Can Anne and Captain Wentworth find their way back to each other?

Jane Austen’s last complete novel is definitely one of her better works and filled with her trademark wit. Persuasion doesn’t dawdle nearly as much as some of her earlier and much more verbose stories. You can really see Austen’s craft sharpening – not just in her characterizations and storytelling, but in her editing abilities as well. Anne is such a strong protagonist in a very quiet way. She’s a normal girl surrounded by a ridiculous family doing her best to stay sane and happy. She’s highly personable and easy to relate to even 200 years later. You root for her on every page. I also particularly enjoyed seeing her growth from a child easily swayed to abandon her own happiness to keep her station in life and family’s reputation in tact into a woman fully capable of satisfying her family without sacrificing her own well-being. Anne Elliot, you are one classy lady.

Captain Wentworth’s letter and his pencil dropping incident at the end of the novel will have you swooning right along with Anne. He’s a great male lead – a very solid, constant presence, a compliment I’m sure he’d be quite thrilled with! He’s gentle with Anne even after she’s hurt him so deeply. I love that Austen is able to write such layered men – men who are both strong and unashamedly sensitive. Gallant, noble heroes can be just as satisfying as the bad boys we tend to love so much.

I highly recommend Persuasion, not that that should surprise anyone. I believe that Anne and Captain Wentworth are perhaps Austen’s strongest couple. I think they are true equals and can see them having the happiest of long-lived marriages. Again, I’m saddened at how early we lost Jane Austen and can only imagine the amazing novels she never got the chance to write.

Join me again Wednesday when I review For Darkness Shows the Stars which is a Persuasion retelling!

12 thoughts on “Persuasion by Jane Austen”