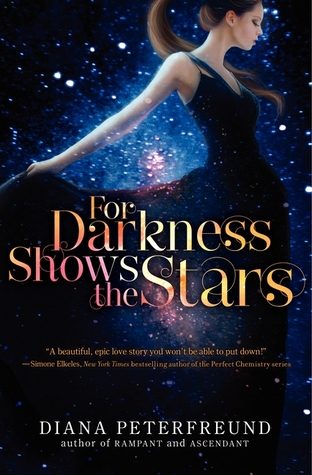 You guys, I’m sick. Curse you, evil germs! Now on to the review:

For Darkness Shows the Stars is a recently released YA novel that tries to fill some pretty big shoes – Jane Austen’s shoes to be exact. Diana Peterfreund sets out to retell the Austen classic, Persuasion, and I could not have been more excited. Thinking back, this retelling might be the only Austen related fiction I’ve ever read outside the purity of her own work. I had high hopes, especially after finishing a reread of Persuasion right before diving into Peterfreund’s re-imagining. The only thing I knew for sure was that the cover was gorgeous. And please forgive me but I’m going to post the Goodreads summary as my own was about three paragraphs too long.

It’s been several generations since a genetic experiment gone wrong caused the Reduction, decimating humanity and giving rise to a Luddite nobility who outlawed most technology.

Elliot North has always known her place in this world. Four years ago Elliot refused to run away with her childhood sweetheart, the servant Kai, choosing duty to her family’s estate over love. Since then the world has changed: a new class of Post-Reductionists is jumpstarting the wheel of progress, and Elliot’s estate is foundering, forcing her to rent land to the mysterious Cloud Fleet, a group of shipbuilders that includes renowned explorer Captain Malakai Wentforth–an almost unrecognizable Kai. And while Elliot wonders if this could be their second chance, Kai seems determined to show Elliot exactly what she gave up when she let him go.

But Elliot soon discovers her old friend carries a secret–one that could change their society . . . or bring it to its knees. And again, she’s faced with a choice: cling to what she’s been raised to believe, or cast her lot with the only boy she’s ever loved, even if she’s lost him forever.

What a mixed bag this was for me. The dystopian world Peterfreund builds leaped to life from the very beginning. This new society is richly layered and so complex. The parallels between this future culture and the antebellum Southern society of plantations and slaves is well-done, adding a levity to Austen’s original class discussions that was much welcomed in a young adult novel. Peterfreund has turned the story of Persuasion into something beyond itself, if that makes sense. Let me better explain: Instead of a silly father and older sister, Elliot North has a very cruel and calculating family. Elliot’s just trying to ensure she’s living on an estate that doesn’t beat, rape, or degrade the workers in the same way that so many estates are now run. She’s not just trying to feed herself; she’s trying to feed all the people who live on her property in a world where food is not plenty.

I liked Elliot. She was deeply conflicted and for good reason. Should she try to genetically enhance her grain to feed more people or stay away from the technology that played God and ruined the human race? What a moral conundrum and Peterfreund handles the ambiguity well. We don’t end the novel with any kind of straight answer although you can see society moving in a certain direction. So much to ponder which really pleased me, particularly in young adult literature.

As for the new embodiment of Captain Wentworth, not such a huge fan. Firstly, his new name, Wentforth, was a bit too silly. The manchild himself was harsh and extremely terrible to Elliot upon his return. I didn’t see much of Austen’s Wentworth in Peterfreund’s creation and that saddened me. Also, the recreation of Wentworth’s letter at the end fell flat. I’m fairly certain that no one should ever try to improve upon or even modernize Austen’s romantic letters. That is just simply too impossible a task.

Wentforth aside, I adored everyone else. All the Reduced, Post-Reduced, and Luddites, whether good characters or nasty villains, were handled extraordinarily well. I’ll also add that Peterfreund managed to surprise me with plot twists several times despite giving major clues along the way. I’m not sure if I was just reading brainlessly or if she has quite the talent for sneaking up on readers. I’d like to vote for the latter!

Unfortunately, what plagued me most about For Darkness Shows the Stars was the ridiculously slow beginning. I didn’t feel the slightest bit involved until 100 pages in and didn’t feel entirely gripped until 200. I almost gave up – twice. However, by the novel’s end I wanted a book two badly. I wanted to know what happened in this world and which side eventually wins. The Luddites with their fear of technology or the rapidly increasing Post-Reductionists throwing caution to the wind? Are the Post-Reductionists actually a cured people? What about Elliot and her wheat, her crazy no-good family? WHAT HAPPENS NEXT? Please and thank you, Diana Peterfreund.

2 thoughts on “For Darkness Shows the Stars by Diana Peterfreund”