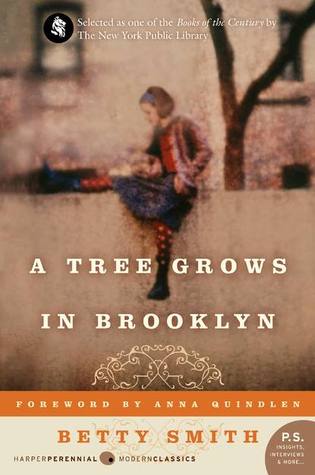 [T]he child must have a valuable thing which is called imagination. The child must have a secret world in which live things that never were. It is necessary that she believe. She must start out by believing in things not of this world. Then when the world becomes too ugly for living in, the child can reach back and live in her imagination.

The Litwits met yesterday to discuss A Tree Grows in Brooklyn by Betty Smith. For the first time in a long time, we universally loved this story. Since we all know writing about books we love is harder than those we hate, this post is going to be atrocious. Francie is my new favorite heroine of all time. Her sad moments are filled with joy, her happy moments sobered by sorrow. She’s independent, smart, and dreamily lonely. Her story is both tragic and uplifting. I wanted to crawl inside this novel and live there forever.

Francie’s story is rather simple – she’s growing up in the tenements of Brooklyn circa 1901-1919. Her family has no money and does whatever’s needed to get by. Papa Nolan sings for his supper, literally, but doesn’t contribute much stability or financial success to his family’s needs. He’s a drunk with a heart of gold. Odd sentence, that. He loves his children dearly – especially Francie, but doesn’t love himself enough to rise above his struggles and survive. Mama Nolan is described as being made of steel. She shoulders the weight of supporting her family by scrubbing the floors of the buildings in Brooklyn. She can be cold and off-putting, but she never loses the loyalty or essence of motherhood. Neely is the coddled brother Francie loves dearly. They had such a beautiful sibling relationship. Much of Francie’s story is Betty Smith’s as well. She definitely wrote what she knew.

Oh, the novel. I dashed if off at odd moments. It doesn’t take long to write things of which you know nothing. When you write of actual things, it takes longer, because you have to live them first.

Emily described Smith’s writing as concise and immersive without being flowery or overdone. I wholeheartedly agree. Her prose is simple, honest, and lingers in sentimentality only at the most appropriate moments. The pacing was perfect and my time spent with this book was never a burden. My only complaint was that there wasn’t more of Francie. I wanted to continue on with her to college and beyond. The shear optimism this book exudes in the face of destitution and poverty won me over.

The ladies also loved Smith’s sense of place. Brooklyn comes alive as does the early 20th century. With A Tree Grows in Brooklyn you get to live a time not experienced first hand. I love books that bring to life something I’ll never be able to experience – unless they invent time travel before I die (it could happen!).Women’s rights were becoming a thing and I liked seeing how the American society was reacting to the stronger feminine presence.

I could totally keep going. But I’ll spare y’all. If you haven’t, go read Smith’s most popular and acclaimed novel. You’ll be left wishing you had read slower and adding Smith’s other works to your TBR shelves.

4 thoughts on “A Tree Grows in Brooklyn by Betty Smith”