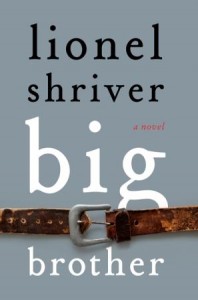 I don’t know how to review this book. Not only are my feelings extremely complicated, but the damn thing involves a plot twist that would spoil the book. But that plot twist is essential to talking about the book. Oh dear. I promise not to spoil things, but if you end up reading please email me and tell me all of your feelings.

It’s rare that anything leaves me speechless in this life I call mine, but Shriver has managed to do so.

In Big Brother, Shriver is tackling obesity. Pandora is our main character who has settled into a very normal Midwestern life at the age of 40. She’s married, has two stepchildren, and runs a very successful doll making company which she founded. For the first time in her life, she’s finally come into her own and stepped out from beneath the shadows of her father and brother.

Her dad was a television star when Pandora was younger and clings to that success decades later. Edison, her older brother, is a renowned jazz pianist in NYC. She has idolized Edison since she was a kid. The novel gets things going with a phone call in which Pandora learns Edison has fallen on bad times financially and needs a place to stay. She flies him out to Iowa despite her husband’s protests. The ‘visit’ has no end date in sight, but Pandora feels loyal to her brother. She hasn’t seen him in four years and doesn’t even recognize him at the airport baggage claim. Why? Because he’s gone from 163 lbs to approximately 400 lbs.

Pandora is baffled at how her once handsome brother has grown so grotesquely large. He eats everything in sight almost without shame. He even breaks her husband’s priceless handmade furniture by merely sitting on it. Pandora’s whole family is mystified and annoyed by Edison – not just because of his girth. He’s actually kind of an entitled jackass and a fairly one dimensional character overall. But Pandora feels some sort of sibling affection for Edison and eventually faces a big decision. She can either leave her husband and children to help sort out Edison’s life and keep him from eating himself to death or she can stay loyal to her family and kick Edison out the door to deal with his own problems.

Her decision is horrendous, jaw-dropping, and made me want to throw the book out of the window. And we haven’t even gotten to the major spoiler that I promised I wouldn’t share.

From a technical standpoint, Shriver is an excellent writer. Her vocabulary amazes me but never bogs down her narrative. The story remains conversational and easy to read in the literal sense. My problems begin with her choice of first person narration. We are stuck inside Pandora throughout the duration of the novel. If you like Pandora, good for you! If you don’t, you’ll be so pissed off while reading this thing that you’ll seriously considering giving up. I challenge you to keep going because the worst is saved for the final 20 pages. *insert evil laughter*

Big Brother is a difficult novel to read emotionally and intellectually. I really couldn’t understand Pandora’s motivations half the time or how such a seemingly smart woman would make such ridiculous decisions. And just when things start really looking up, Shriver crushes all your hopes and dreams. *insert more book chucking* There is nothing fun about this reading experience – not the slightest bit of entertainment or pleasure. But somehow I don’t regret reading and even find myself thankful for not giving up. Why? Because this story will challenge you in a way that most books won’t. How things unfold felt very unique although maybe a bit gimmicky. And I even had a couple of moments of self-realization where I had fallen head first into hypocrisy.

So if any of my bumbled and fumbling review above sounds interesting to you – definitely seek out Big Brother. I’m not sure how it stands up to her other novels, but she’s an author that now has me thoroughly intrigued. After finishing this one, I did some research and discovered that Shriver’s brother died due to complications from obesity so that helps me see how this novel came to be and how difficult a situation Pandora might have been in.  So…recommended with reservations, but perhaps a wonderful book for a book group to discuss. Litwits – I’m looking at you!!

Thanks so much to TLC Book Tours and the publisher for a copy of Big Brother in return for my honest review. Check out the other tour dates here!

Lionel Shriver is a novelist whose previous books include Orange Prize–winner We Need to Talk About Kevin, The Post-Birthday World, A Perfectly Good Family, Game Control, Double Fault, The Female of the Species, Checker and the Derailleurs, and Ordinary Decent Criminals. She is widely published as a journalist, writing features, columns, op-eds, and book reviews for the Guardian, the New York Times, the Wall Street Journal, the Financial Times, the Economist, Marie Claire, and many other publications. She is frequently interviewed on television, radio, and in print media. She lives in London and Brooklyn, NY.