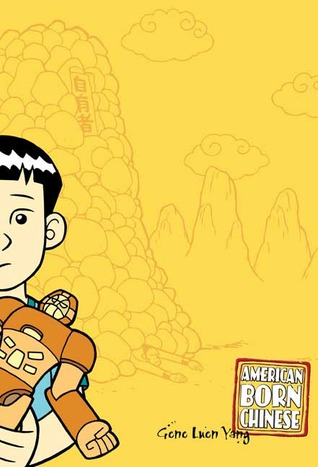 American Born Chinese appealed to me on several levels. One: Pictures. Two: I am married to a Taiwanese immigrant. Three: Pictures. Four: The seriously amazing rave reviews. 5: Boba Tea.

Gene Luen Yang’s story follows Jin, Danny, and the Monkey King. Jin is a Chinese American boy who just wants to fit in with his white, all-American classmates. Danny is the apple pie to Jin’s dim sum whose life gets disturbed once a year when his Chinese cousin Chin Kee comes to visit. And the Monkey King simply wants nothing to do with being a monkey. Yang’s three story lines start out going their separate ways until they brilliantly collide and teach everyone a thing or two about identity, acceptance, and the human condition.

And yes, brilliant is the only word that suits American Born Chinese. Brilliantly clever. Brilliantly heartwarming. Brilliantly honest. Each character is at once charming, lovable, and a total rascal. As a graphic novel, I was super impressed at how each character develops so richly throughout the narrative’s short, yet expressive, pages. Yang deserved all the awards, not just the Printz, in my opinion. A great novel to share with anyone in your life.

The illustrations are gorgeous and do such an excellent job at showing motion. I haven’t read another graphic novel that I can recall where the action really seems to move. Each drawing adds something to the story and often has emotional impact. I really can’t gush enough. American Born Chinese is my new favorite graphic novel. It’s a story worth telling and a story Yang tells expertly.