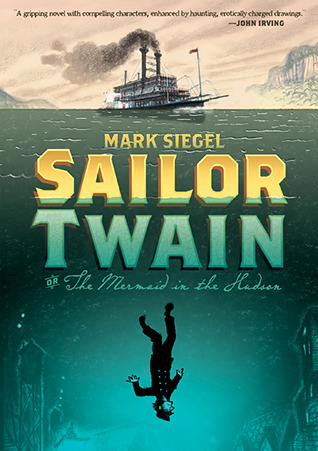 Sailor Twain by Mark Siegel is an adult graphic novel. That’s all I really needed to know in order to pick up a copy from the library. Because I’m a total graphic novel lush these days. Throw in the words ‘fairy tale’ and ‘mermaid’ and there is no telling what I’ll do.

Sailor Twain tells the story of Captain Twain, a 19th Century riverboat captain working a ship on the Hudson River. The boat’s owner is a rather fancy Frenchman who is obsessed with taking seven lovers which baffles Twain. Then Twain finds a wounded mermaid and nurses her back to health. All of these things eventually connect and lead to some very strange happenings at the bottom of the sea.

What struck me first with Siegel’s novel is the artwork. The charcoal drawings are so atmospheric and gloomy. Considering it rains throughout the entire story, these drawings set the absolute perfect mood. At times, the human figures can look cartoon-ish, but this didn’t bother me since the book is part fairy tale. Do be warned, however, that the drawings can be quite graphic as there is full frontal nudity. Not a book for the kiddies.

As for the plot, it was mostly a quick, dark, fun little read. At times though, things just felt a bit confusing – like there was too much happening for anything to be super well done. I’m not sure how much that was a personal comprehension failure. I would find myself having to really study a page or so of panels to try and figure out what was going on. Those moments took the magic out of reading.

The characters were also sort of uninteresting. I would liked to have cared more for them. Captain Twain did earn my sympathy at parts, but the way he treated his wife ruined it all. I did enjoy the not-so-delight mermaid. She was an odd-duck until shit hit the fan and then I liked her crazy ass. The ending was extremely ambiguous and left up to your own personal interpretation. That wouldn’t have bothered me too much if the rest of the story had been more decipherable, but alas…

So not my favorite thing ever, but still worthy of giving a shot if it sounds like something you’d enjoy. Go find it in the library and breeze through it in an hour or two. I’d love to see what others think about Sailor Twain – especially the end.

So, tell me – what was your least favorite graphic novel and why?