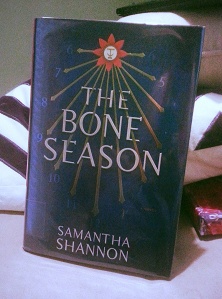 Ah, The Bone Season. Probably one of the most anticipated books of 2013 and definitely one of the most marketed. Famously, Samantha Shannon received a 7 book deal with a six figure payout. The movie rights were also snatched up before the book had hit shelves. That’s a lot of hype to live up before you even mention the Harry Potter comparisons.

The novel’s premise is complex. Shannon has created an urban fantasy, dystopian world calling itself an alternative 2059 London. Our supernatural creatures include clairvoyants (a million different classes of them), the Nephaim, and Emim. Clairvoyants are hunted down by a new Scion government and executed or jailed for simply existing. Paige is 19, the most talented kind of clairvoyant – a dreamwalker – and one of the Seven Seals, the leaders of an underground organized crime syndicate. But then she gets captured by the Nephaim and all hell breaks loose.

I can’t even express how simplistic of a plot summary that last paragraph was, but honestly, it hits the high points.

What many have complained about in The Bone Season is the overwhelming amount of info-dump that takes place near the beginning of the story. It’s a whole lotta show and not tell, absolutely, but I didn’t find that to be off-putting whatsoever. I found it fascinating – almost like a nonfiction analysis of this new and complex world. Samantha Shannon has quite the detailed imagination and that’s where I think the Harry Potter comparisons ring true. She knows her world inside and out.

The Bone Season also includes a good amount of 19th Century British street slang that makes a glossary necessary although I didn’t look at it a single time. I didn’t think many of the terms were too difficult to suss out through contextual clues. I did, however, find the map and classes of clairvoyants included in the first few pages highly informative and flipped over to them frequently. But I love that sort of thing.

To put it simply, The Bone Season was a tad underwhelming story-wise. I loved the world building, but the plot progression was entirely derivative and predictable. There’s nothing truly new here. The action is well-done, and I think Shannon could become a great writer, but she needs more experience under her belt. The phrasing and sentence structure were a bit too bland or cheesy and slowed the book’s pacing down quite a bit.

I can’t honestly recommend that y’all go out and buy this book, but if you are looking for something filled with action, superb worldbuilding, and are willing to overlook some flat writing/plotting, then check this one out from the library. I’ll probably wait to see how the series progresses before picking up any additional titles in this series.

10 thoughts on “The Bone Season by Samantha Shannon”