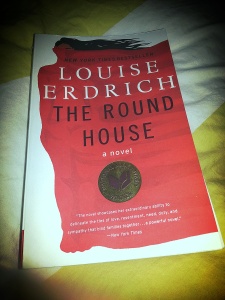 I haven’t actually finished The Round House as I write this sentence. I’m a little under 50 pages from the finale, but can’t imagine my thoughts changing whatsoever. If they do, I’ll come back and amend these statements, but I’m pretty certain this post will stand.

Louise Erdrich’s National Book Award winner mixes family tragedy with Native American politics. In 1988, Joe is just a normal thirteen-year-old boy obsessed with Star Trek living on the rez in North Dakota. But then his mother is attacked – brutally – and crawls inside herself to hide from the pain. Joe sets out determined to uncover the identity of his mother’s attacker and finds himself in dangerous situations and underneath the scope of dubious political lines.

Nothing I’m about to say should really mean anything to anyone. I mean, what do I actually know about things? But if I’m being brutally honest, The Round House didn’t do much for me. I didn’t hate the time I spent reading the book, but I could barely force myself to pick it up once I had tossed it aside.

The writing just rubbed me as rather dull and tangential. The ‘suspense’ aspects were muted and often felt lazy. The pacing was all over the place – slow exposition, random Native American myth and legend, coming of age teenage stuff, and legal thriller with a healthy dose of Catholicism on the side. Too much that did too little for me. Overall, I just didn’t care.

Readers adore this book and Erdrich’s writing in general. I’ve read tons of reviews glowing over her lyrical language, gripping stories, and amazing knowledge inside the Native American culture. So there’s no need to take my word. I would never have granted The Round House the NBA, but someone else did who has far more credibility than myself.

Many reviewers even likened this story to To Kill A Mockingbird which I haven’t read in a long time, but now I’m almost desperate to compare the two myself. There were moments within Erdrich’s story that were great – a scene with a priest around 100 pages in stands out. I also found several peripheral characters compelling, but none in the main circle. Just not my bag, but it could be yours. I think this might be a situation of it’s me, not you.

P.S. I just listened to the Book Riot podcast where they raved about this book. WHAT IS WRONG WITH ME? I’ll definitely be giving Erdrich a second chance. Any suggestions?

*HOLY HELL! That ending was insane.

Thanks to TLC book tours and Harper for a copy of this book in return for my honest review. You can catch the full tour here and many, many second opinions.

Louise Erdrich is the author of fourteen novels, volumes of poetry, children’s books, and a memoir of early motherhood. She lives in Minnesota and is the owner of Birchbark Books, a small independent bookstore.

11 thoughts on “The Round House by Louise Erdrich”