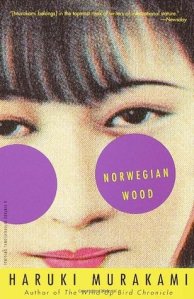 Haruki Murakami. Just writing those words evokes so many feelings and ideas. Readers in Japan treat his release dates similar to the release of each new Harry Potter novel, lining up outside bookshops at midnight. He’s a BIG DEAL. And he pissed me off.

Norwegian Wood follows, Toru, a young man going to college in Tokyo who is dealing with the aftermath of his best friend’s suicide. He weaves in and out of relationships with various women, including Naoko, the ex-girlfriend of said best friend, and Midori, a vibrant fellow college student who’s dealing with her own loses.

And that’s pretty much it. Murakami’s only straightforward and traditionally plotted novel was written merely as an experiment to see whether or not he could do such a thing. At best, it’s a beautifully written character study and exploration through the mind. At worst, it’s an ass-backwards misogynistic romp led by literature’s most boring male protagonists of the all times.

First things first, I loved the writing something fierce, and I can’t wait to explore Murakami’s other works no matter how problematic his gender renderings can be. I loved Naoko and Midori both as strong, yet different, female characters. Naoko’s internal emotional and psychological struggles were realistically drawn. Midori, my favorite character, was full of life: bright, bold, brash, and beyond clever. Unfortunately, Murakami couldn’t  just leave it at that.

Instead, we see these amazing women and many more of Tokyo’s young female population tremble and succumb to Toru’s irresistible sexual force. All of the women in this novel sleep with Toru. All of them. And for what reason? I can’t find a single damn one. He’s dull, without personality, and barely even speaks to them half the time. He’s no James Bond, that’s for sure. Even Naoko, who was never even able to sleep with the supposed love of her life, gives in to Toru during a particularly emotional scene, and I ain’t buying that. AT ALL.

I’ve heard this kind of ridiculousness continues in Murakami’s other endeavors, and that worries me. But I’m willing to push onward on the strength of his writing. After all, if Toru had disappeared from Norwegian Wood’s narrative (or even just the sex), the book would have been fabulous. And I like sex as long as it makes sense and serves a purpose. The only purpose I found here was a male writer’s wish fulfillment. Oh well.