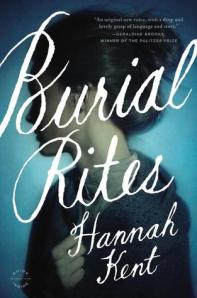 The Litwits met on Sunday to discuss Hannah Kent’s debut novel released last year. Putting this book off for almost a year was next to impossible because so many of my online bookish friends loved, loved this story. And for the first time in a long time, I had to force myself to stop at 50 pages a day because I wanted to savor this gem of a book. I never wanted it to end.

Burial Rites is another novel that I don’t feel needs much introduction. It takes place in Iceland in the 1820s. Two women and one man have been charged and convicted of killing a man. Our protagonist, Agnes, has been sentenced to death by beheading. Kent writes of her final months living with a farm family as she awaits her looming death.

That’s not spoiling anything because this is a historical fiction novel based on the true story of the last beheading in Iceland. So…you know how it ends going in, but damn if you don’t hope and pray Agnes will find someway to beat her murder wrap. Whether or not she even committed the crime becomes almost a non issue as you fall in love with this orphaned, lonely, sad woman. I defy you not to want Agnes’s name cleared!

Beyond the central plot, Kent gives you so much else to love. The Icelandic landscape in all its cinematic glory and rolling hills and biting cold surrounds you and places you firmly within the story. Her writing is GORGEOUS. Her descriptions are lyrical and immersive. Some members did think she could be a bit long-winded at times and a little too dirty with her imagery (she doesn’t shy away from the nasty smells and ugliness of  bodily function), but others adored her language for its realism. Personally, I found myself reading the passages out loud – sometimes over and over again – mesmerized by all the pretty words.

Agnes was my favorite character, but many Litwits loved Margret as well. We discussed how Margret desperately didn’t want Agnes in her house, sleeping right next to her own two daughters. But once Agnes arrives in her pitiful state, Margret can’t help but feel for the doomed woman. What makes that so particularly interesting is how un-motherly Margret seems around her own children. Margret’s daughter, Lauga, quickly grows to resent her mother’s affection for Agnes creating such tension as the story unfolds.

We discussed the novel’s ending at length. Several of us felt the ending to be very abrupt, too rushed in its conclusion. Others thought this was done on purpose to emphasize the death that couldn’t be stopped. But it was just so sad.

So Burial Rites was a winner among the Litwits! We got a lot of good conversation in before our inevitable fall into the descent of television, tumblr, and fanfiction. Until next time ladies!!