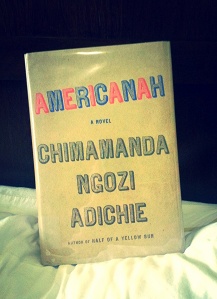 Americanah is a hugely ambitious novel thematically. There’s a love story between a man and a women, another between people and their countries, racial issues, socio-economic issues, Americanism, Africanism (I’m making up the ‘isms’), Britishism, ideas of home, culture, hair, academia, liberalism, conservatism, and the list could grow much longer. That’s a lot to cram into 500 pages or less. Maybe too much.

Chimamanda Ngozi Adichie is without a doubt one of our most talented contemporary writers. I can say that without having read any of her other novels. She has a vision and a grand mission to her writing that is often grounded in humorous anecdotes and the minutiae of everyday life. In Americanah, she’s created such an engrossing character in Ifemelu who leaves her native Nigeria and her love, Obinze, to attend college in America. Ifemelu ends up spending the next 15 years of her life living, loving, and writing amid the first world hustle and bustle. She becomes a cultural writer with a hugely successful blog discussing her views of race and racism from the perspective of a non-American black. Then she decides to head home to Nigeria and face the man she abandoned all those years ago who is now rich, married, and a father.

Adichie’s writing was rich and engaging once I had warmed up to Ifemelu as a character. The narrative does skip between her perspective and Obinze’s, but more often than not we are with the blunt and sharp tongue of Ifemelu as she navigates her new life in the States. Ifemelu is not an easy character to read, many won’t like her, but the way she sees things is so revealing and undeniable. Despite her rough edges, she’s a literary character I want more of and regretted leaving. I loved her blog posts as she tackled the topic of racism in America. She didn’t allow me to shy away from tough questions about the country’s prejudices and my own.

But like I said earlier, Americanah does try to do a bit too much and suffers from not necessarily knowing what type of story it actually wants to be. I can’t help but think if only a couple of the themes addressed above were handled instead of all, this could have been a nearly perfect novel. I’d even go so far as to say that the last 50 or so pages of romance between Obinze and Ifemelu were utterly unnecessary.

All that aside, Adichie has won over a new fan and I can’t wait to read the rest of her work. Americanah is an important book, a big book, and although not perfect, damn near close enough.