I finished the Delirium trilogy! I feel like I start so many book series and then never finish them. So to finally notch one completely off my list feels good. Plus, there’s a television show being made adapted from the novels. I’m rooting for the show – hoping it even outshines the books.

As many of you know, I wasn’t a huge fan of Delirium, but Pandemonium completely won me over. For the second book in a trilogy to surpass the first is rare – although most people don’t agree with me about Pandemonium’s clear ass-kicking of Delirium. So I had great hopes for an even better ending. But it was not to be.

Not that Requiem was terrible, not at all. I just was in like with it rather than in love. Mostly because of how Oliver managed to force Julian’s character firmly into a mere plot device and send him on his merry way as soon as was conveniently possible. I respected this love triangle until that ridiculous end. But I guess Alex was always going to win – so why bother with Julian?

And really, the end was the book’s biggest problem. So rushed – almost like Oliver wasn’t allowed to go over her 400 page word count without some sort of unfortunate consequences. Everything just ends and feels so forced. I was majorly disappointed that we have no clue what becomes of Hana despite her being one of the two narrative perspectives in Requiem. WHAT THE HAY?

Up until the end, however, I enjoyed most everything a great deal. I loved seeing the post-cure world that Hana was inhabiting and how the cure affected her specifically. And Lena didn’t even get on my nerves much, either. I didn’t see much character growth this time around for her, but at least she didn’t annoy me too much.

The action scenes were well done and suspenseful although a little too far and few between. Not that the novel reads slowly – I read practically the whole thing in a single sitting while I was sick this week. Oliver’s writing has come a long way since Delirium, in my opinion, and I appreciate her talents and hope to see more from her in the future.

Overall, I’d recommend the series if you want something easy and entertaining to read. Beware of the first book, but the next two make up for it! My biggest problems with the series as a whole was the lack of world building – most specifically, the history of this particular world. I’m still not certain how the US got to the point of curing its citizens of love or how the rest of the world fit into the picture. I’d have loved more back story.

Anyway, happy to be done and now ready to start a new series. I’m going to be giving The Mortal Instruments a read. I read Clockwork Angel last year and enjoyed, so now I’m looking forward to starting with TMI and working my way through all of Cassandra Clare’s backlog. With the movie coming out in August, I’ll be fully prepared! 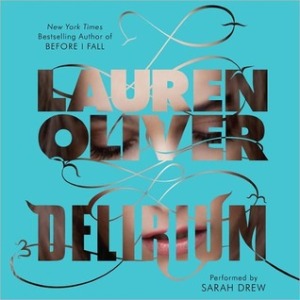 My first audio book ever!  Sarah Drew’s narration of Delirium by Lauren Oliver was a great place to start.  Her voice could be slightly whiny at times, but I just chalked this up to proper character treatment as Lena was often whiny.

Delirium is a young adult dystopia set in a world where love has become a deadly disease.  The government has put the US in lockdown mode and requires all citizens to receive the ‘cure’ once they turn 18.  So instead of a world driven by love, hate, and passion, Lena (our heroine) now lives in a world filled with fear and indifference.  She’s perfectly content until she meets Alex, a boy from the outside wilds, who helps her uncover the truth the government has so desperately hidden beyond the city’s electrified fence.  Insert cliffhanger and anxious waiting for second book in series here.

A world without love definitely qualifies as an interesting premise and Oliver does a masterful job at creating a backlist of literature, government propaganda, and medical pamphlets to convince readers that there is something to fear in loving freely.  As a reader, you can almost become convinced that a world without passion, without hate born from passion might be better – until the incident with the dog (no spoilers beyond that!).  Then you realize indifference doesn’t solve our world’s problems, only creates new issues.  Issues with no hope of resolution because no one cares enough to change anything anymore.

Delirium began quite slowly – which can be understandable when you’re building a new world.  A lot of exposition takes place, but I kept waiting for the pacing to pick up – for the action to overtake the languid plotting and that just never happened – until the final few pages.  And by then I was so frustrated that the cliffhanger wasn’t even that exciting and was completely predictable.  I was also frustrated with character development – Lena’s character changes and grows a bit (somewhat reluctantly), but Alex is rather flat and Hannah, in my opinion, regresses.  For this reason, the love story between Lena and Alex didn’t ring true.

What did work for me was the thoroughness of the world.  Oliver’s strength definitely lies in her imagery and description.  The evil government and their incredible lies juxtaposed against a Portland, Maine backdrop of endless sea and the freedom of flying seagulls.  Seeing the citizens completely under the charm and control of representation they’ve put their blind faith in is so scary.  Not only is the US separate from the world now, but each individual city is locked down from each other.  You never leave your little fishbowl – you never know what exists outside that fence.  Terrifying.  The Wilds was also done so well (the world outside the fence where the uncureds and sympathizers live).  The broken streets, abandoned houses, and bombing remnants are visceral and haunting.  I could picture my own street in the aftermath of a civil war.  These were the images that made Delirium soar.

I’ll get around to reading the second in the series, Pandemonium, once it’s released.  I hope the pacing picks up and that Oliver convinces me these characters are worth following for a third book.  If not, I’ve enjoyed the world she’s built and believe she’ll only grow as a writer over time.  Can’t wait to see what she has in store for us next!

I hope everyone has a Happy New Year!  I’m excited for 2012 and many books ahead.