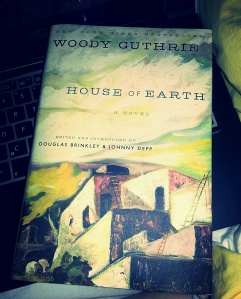 Woody Guthrie is a man most Americans know through his song, “This Land is Your Land”. Basically, American children sing that song approximately 1 million times before they leave elementary school. Guthrie penned many, many more folksy, Americanah ballads during his lifetime, but not many know that he also wrote a novel (novella, really) that he hoped would be made into a film. Alas, that didn’t happen and the manuscript was never published – until now! Thanks to Douglas Brinkley and Johnny Depp (yes, that Johnny Depp) Guthrie’s 1947 novel set during the dust bowl era has finally seen the light of day.

Tike and Ella May Hamlin are newly married. During the course of the novel, we follow tan early year of their marriage through poverty and the birth of their first child. That’s pretty much the gist of everything that happens.

Quite literally, the novel follows the fertility cycle and is written in four movements. I call them movements since Guthrie was all musical. The first movement is a very long sex scene. Let me emphasize the very long. Like 30-50 pages of sex. The last movement is a really long birth scene in which Tike fantasizes about sex with the midwife. My point being – there is a lot of sex.

As a portrait of life, of poverty, of the American dream and the inability to obtain such a thing, House of Earth actually works quite well. As an enjoyable curl up and read novel, not so much. It’s short, but choppy. The prose is both lyrical, flowery, and stark all at the same time. The fertility themes are a bit too on the nose and the sex lacks a certain subtlety I prefer in ‘literary fiction’. What Guthrie needed was a few re-writes to find ultimate success. So I can’t honestly recommend this book to anyone other than hardcore Guthrie enthusiasts.

His fiction aside, Guthrie’s life was fascinating and if you ever have the opportunity to read a biography it would be well worth your time.

Thanks so much to TLC Book Tours and the publisher for a copy of the book in exchange for my unbiased review. You can check out other tour stops right here!