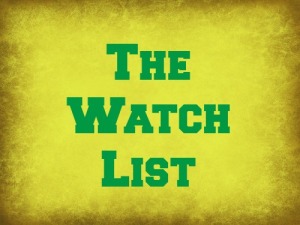 For so long I’ve tried to become a pseudo film buff, but it never seems to stick. I’m not sure why. Perhaps I’m just too ambivalent about cinema in general. Or maybe I’ve just never found the right combination of time/desire to really advance my film buffery (a word I’ve just invented). Whatever the case, I’m embarking on a new cinematic journey and wanted to tell y’all about it.

I’ve compiled a list of great movies by decade starting with the 1930s. This list is a combination of hours of internet scouring. I’ve got movies loved by men, women, white people, and black people. I’ve gathered films in foreign languages and the English language. I searched lists of differing genres and those that are considered underrated, best of the all times, serious, quirky, etc.

With the trusty help of random.org, I will be selecting four movies to watch each month starting in March. One from the 2000s, 90s, and 80s each. And then one from the 30s-70s. This method makes the most sense in my mind.

The only hiccup I’ve come across thus far is movie availability, particularly with foreign language films. For the more obscure movies, I’m either going to skip them altogether (what can you do, ya know?) or wait until the project really catches hold and consider spending extra money. I’m sure adding the Netflix snail mail plan would get me most of the way there, but I’m not ready to commit to anything beyond my streaming only option just yet. Amazon Prime seems to be the best way so far. Most movies are either free or $2-$3 rentals.

So, without further ado, here’s my To Be Watched list for March! Join me if you feel so inclined or ignore me altogether. Both are valid life choices.

I haven’t seen a single one of these so I’m super duper excited. Let me know which ones you’ve seen and what you thought!!