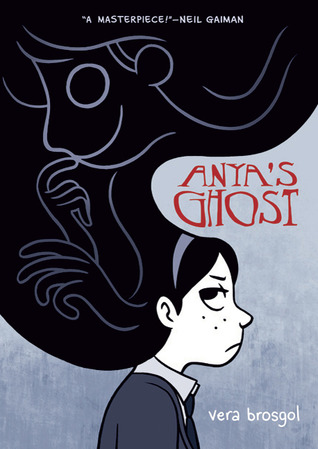 I’ve been gathering a large number of graphic novels recently in the hopes of growing more well versed in that particular literary genre. The Litwits are even having a graphic novel/comic themed month in September. In order to prep for that, I’m going to do my best to actually read some of my recent purchases.

Anya’s Ghost is the story of a teenage girl going through all the angst and self-esteem issues that plague today’s youth. Anya’s self-consciousness is also compounded by the fact that she’s Russian and trying so hard to be a traditional ‘American’. She’s spent years trying to lose her baby fat and her accent. Despite all her determinism, Anya has still only managed to make one on-again, off-again friend by the time she reaches high school.

As one faithful day would have it, Anya falls down a well. Yes, a well. Very ‘Alice and the rabbit hole-esque’. In the well she encounters a skeleton with a ghost attached. The ghost’s name is Emily and desperately wants to be Anya’s friend. Anya begrudgingly gives in and soon begins to benefit from Emily’s sneaky ways.

Somewhere along the line, however, Emily turns out not to be what she seems. And through this very unearthly lesson, Anya begins to see her life a little more clearly.

Loved it! Such a fun narrative made all the better by the gray-scale drawings. The illustrations have a very decidedly cartoon-esque appeal and Brosgoll expertly captures emotion and plot movement even in her drawings without exposition or dialogue. Her story is also incredibly unique. Emily could have been a very simple and underused plot device, but her ghostly nature and devilish past rose above all my expectations.

Anya’s Ghost also succeeds in remaining firmly grounded in reality despite the supernatural aspects. Anya’s struggles with her peers, boys, and family rang so true. She’s going through the terribly turbulent years where rebellion seems her only friend and who hasn’t felt that once or twice as a teenager?

This novel is one I’d suggest gifting to a teenager in your life – especially a female teenager. It captures several great morals without seeming at all preachy and manages to remain a super cool romp rather than an overwrought lecture. I loved Anya and the twisty ending so much. The drawings were spectacular and now I’m craving graphic novels like nobody’s business.