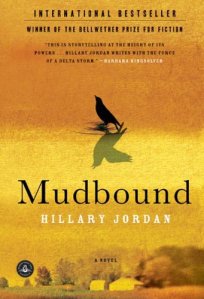 All last year, I saw Hillary Jordan’s When She Woke advertised on tons of bookish sites and myriad book blogs.  I was surprised to discover that her first novel was actually Mudbound, which had received the Bellwether Prize in 2008.  When Mudbound was listed as Amazon.com’s Kindle Daily Deal a few weeks back, I immediately placed my order.

In 1946, Laura McAllan finds herself moving from the city life of Memphis, Tennessee to farmlife in the Mississippi Delta with new husband, Henry, and her father-in-law, Pappy.  Henry is a war vet and a simple man who has always dreamed of owning his own land to cultivate and harvest.  His father is a racist, selfish, hateful bigot with no other place to go.  When Henry’s brother, Jamie, comes to live with them, he befriends Ronsel Jackson who’s the son of a black sharecropping family that live on the McAllan farm.  Both Ronsel and Jamie have just fought in WWII which helps them form a powerful friendship that overcomes many of the racial barriers steadfastly held by their neighbors.  Unfortunately, the McAllans and Jackson soon find themselves on the losing side of ill-fated traditions and a society bred to discriminate and uphold the laws of separate but equal no matter the cost.

Mudbound is told through various narrators – Laura, Henry, Jamie, Ronsel and both his parents.  We never hear Pappy which I found odd since he plays such a pivotal role in how the novel’s events play out.  He’s a bad man, but I’d have liked to see what was going through his head.  I’ve never been a big fan of characters that come off as absolutely evil or absolutely good – there’s something disingenuous in these kinds of absolutes.  Snubbing his voice felt like Jordan hated and was severely angry with her own creation – he felt cardboard and inhuman.  I liked hearing the perceptions of the others, but at times the switch between characters could be abrupt and off-putting – I often found myself flipping back to remind myself who was speaking.

The novel’s pacing was also a bit off.  It took me several pages to get into the story and I was worried all the glowing reviews had been misleading, but about midway the plot picked up and I could not stop reading.  Something about Jordan’s writing, the profundity and cruel sincerity she brings to the story make this novel entirely worthwhile.  No matter how many stories you’ve read concerning the South, this one will find a way to make you see things anew.  Amidst the heart-reading tragedy is a grace that quietly falls upon these characters and makes you feel so intensely for them.  This story will stay with you long after you’ve moved on to another book.

So Mudbound has encouraged me to seek out When She Woke which I believe is a retelling of The Scarlet Letter.  I think I’ll reread The Scarlet Letter and then dive into When She Woke and do a big comparison post.  That sounds like a lot of fun.  Jordan is one of those authors I’ll definitely follow and continue to read.  The mechanics of her writing need a little fine-tuning (namely POV), but her storytelling ability is pure talent.

3 thoughts on “Mudbound by Hillary Jordan”