I’m fascinated by Louisiana and the New Orleans area – always have been.  There’s just something so uniquely Southern about this part of the country, an almost haunted feeling of past meshing with present that intrigues me so much.  So when I know a story is set there, I absolutely cannot resist.  The Cutting Season, Locke’s second novel, captures the tension of antebellum plantations and modern day perfectly, only enhancing my obsession with the spirit of Louisiana.

Caren Gray has come home again, back to Belle Vie, the plantation where her family spent generations as slaves cutting cane and where she grew up while her mother played cook to the current day owners, the Clancy family.  But now Caren is manager of the property and trying to come to terms with her family’s history and how to reconcile an ugly past with a promising future.  To complicate matters, a migrant field worker is found murdered on Belle Vie’s property and now a killer is on the loose.  Before long, Caren realizes that this present tragedy is all too similar to a past crime against her ancestors.  Can Caren find the killer before someone else gets hurt or an innocent party is thrown in jail?

Attica Locke can write, plain and simple.  I loved settling down in her prose for hour after hour of time more than well spent.  The Cutting Season really transcends any sort of typical murder mystery to become this haunting historical mystery novel full of atmosphere and a strong sense of place.  There’s so much more to care about within these nearly 400 pages besides the whodunnit.  Caren’s relationship with her mother and her own daughter is nuanced and complex.  The bridges and gaps between who we were, who we are, and who we will be are deeply studied and brilliantly realized.  I believe Locke has written a novel worthy of any college classroom that simultaneously satisfies picky plot-driven readers.  I can’t wait to pick up a copy of her first novel – how did I ever miss it to begin with?

I will say that the first third of the novel travels a bit slowly.  Locke spends a hundred or so pages painting a detailed picture of Belle Vie, her characters, and the murky past that will come into play so heavily during the much more quickly paced latter half.  But hang in there and you won’t be disappointed.  And the killer is far from easily spotted.  I suspected multiple shady and not-so-shady characters throughout the pages!  The resolution was so tightly plotted and realistic – these events could so easily happen in real life that it almost felt like really well done narrative nonfiction.  I literally googled the historical facts surrounding the murder case before remembering everything was fiction!

All-in-all, a great read and a perfect selection for October – just the right amount of spookiness and atmosphere for Halloween.  Attica Locke is an author you don’t want to miss out on, I promise!

Thanks so much to TLC Book Tours and the publisher for providing the review copy in exchange for my honest review.  Check out the other tour dates here! 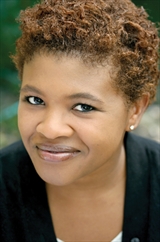 Black Water Rising, Attica Locke’s first novel, was shortlisted for the prestigious Orange Prize in the UK in 2010. It was nominated for an Edgar Award, an NAACP Image Award, as well as a Los Angeles Times Book Prize and a Strand Magazine Critics Award.Black Water Rising was also a finalist for the Hurston-Wright Legacy Award.

Attica Locke has spent many years working as a screenwriter, penning movie and television scripts for Paramount, Warner Bros., Disney, Twentieth Century Fox, Jerry Bruckheimer Films, HBO, and Dreamworks. She was a fellow at the Sundance Institute’s Feature Filmmakers Lab and is a graduate of Northwestern University.

A native of Houston, Texas, Attica now lives in Los Angeles, California, with her husband and daughter. She is a member of the board of directors for the Library Foundation of Los Angeles. Most recently, she wrote the introduction for the UK publication of Ernest Gaines’s A Lesson Before Dying. Her second book, The Cutting Season, will be published by HarperCollins / and Dennis Lehane in September 2012.

8 thoughts on “The Cutting Season by Attica Locke”