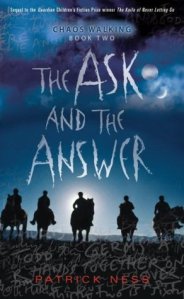 Yet another book I was all prepared to love. In fact, it was a total free choice book at the end of February. There was no obligation – just desire! Meant as a fabulous birthday present to myself. Because I loved – LOVED – The Knife of Never Letting Go which kept me on the edge of my seat the entire time. Heart attack central. But y’all, I found myself bored more often than not.

I’m not going to detail the plot since this is the second book in the Chaos Walking trilogy. The series as a whole follows the human race after abandoning Earth and shacking up on a new planet. Lots of things have gone horribly wrong. Men’s thoughts are heard by all. Where are all the women? Alien races are being oppressed. And the leaders are complete dictatorial douches. You know, the usual. The story follows adolescent protagonist Todd Hewitt as he tries to navigate his enemies and usurp the political status quo.

TKoNLG was all about the chase. And it was epic. Page after page of Todd running, running, running. He met new people along the way and uncovered so many secrets. To be honest, the plot was almost too exciting. It required breaks for my sanity. The heartbreak was also staggering. I knew The Ask and the Answer was going to be an entirely other thing – a book about tyranny and oppression – but I didn’t expect to grow bored.

So what happened? The basic story was fine, even great. The number of pages it took to tell was unfortunate. As we switched back and forth between our narrators, I often found myself yawning and hoping somebody would finally make a decision or a revelation or something. I could simply blame this dullness on the back and forth narration. But that wouldn’t be telling the whole truth because both Todd and Viola annoyed me.

Did I enjoy anything? Of course! I still gave the book three stars, after all. I enjoyed seeing Mayor Prentiss charm and manipulate the town. The elaborate chess game the charismatic dictator plays is fascinating to watch. The gender commentary was also engrossing. I love that Ness’s books are never just one thing. He takes writing for young adults seriously and respects their intelligence. Love, love that. The novel’s conclusion was a force to be reckoned with and does a beautiful job urging one on to the final installment. I just wished all the character bits had lived up to all that.

But don’t take my word for it! Several readers cite this as their favorite in the trilogy. Some readers think the whole thing is trash. I’d suggest, however, that this is one YA series worth giving a go.

6 thoughts on “The Ask and the Answer by Patrick Ness”